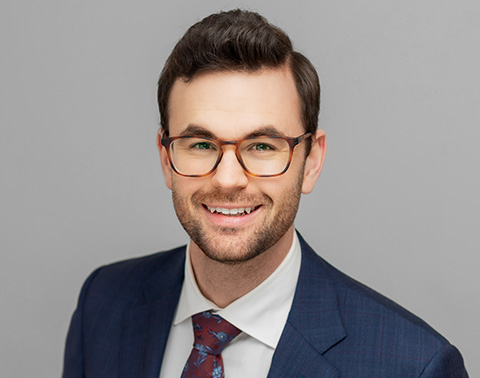 Alex was born in Des Moines and raised in the town of Van Meter, where he graduated from Van Meter High School in 2011. He then went to Wartburg College in pursuit of a degree in biology while also competing on the school’s track team. After graduating from Wartburg in 2015, Alex took some time away from academics to pursue other interests. But having grown up around the law, he always thought about becoming an attorney. He finally acted on this idea by attending Drake Law School and graduated in 2021.

During his three years at Drake, Alex was an active member on a few of the school’s competition teams: ABA Moot Court Team (2021), ABA Arbitration Team (2020); AAJ Mock Trial Team (2020); and ABA Arbitration Team (2019). He completed two semesters as a student-attorney in the Drake Legal Clinic where, while under supervision, he was responsible for clients and their cases, and carried on with all the required duties of a bar-certified criminal defense attorney. He also completed a semester-long internship at the Dallas County Attorney’s Office where, while again under supervision, he oversaw the misdemeanor docket and had all the responsibilities of a bar-certified prosecutor. Throughout law school Alex also worked as F. Montgomery Brown’s law clerk in addition to other activities. Mr. Brown then hired Alex as an Associate when he was admitted to the Iowa Bar in 2021.

In law school, Alex focused his studies as best he could on criminal law and graduated with Drake’s Prosecution and Defense Certificate. His mother has been a practicing prosecutor for nearly 35 years and during his stepfather was a prosecutor and worked in the Iowa Attorney General’s office throughout his 40-year career. Alex might be new to the practice of law, but this is where he feels he is meant to be. He is most comfortable when in a courtroom, in front of a judge, opposing counsel, and a jury. Even given his infancy as an attorney, Alex’s resume is quite noteworthy, having experience in state and federal courts. He has worked on simple, serious, and aggravated misdemeanors, along with major felonies including drug offenses, weapons violations, theft, assault, sexual assault, murder, and more.

Alex prides himself in his ability to connect with others and build good working relationships with his clients. He goes to work for his clients, putting their interests first and getting the best resolution he can. There are four words that headline this website’s homepage: Capable. Tough. Prepared. Proven. Alex embodies these words. He is more than capable of handling all cases that come his way. There is no question that he is tough, always fighting and advocating for his clients. Each time Alex steps foot in the courtroom, he aims to be the most prepared person there—having repeatedly studied even the finest of details of the case. Finally, Alex takes each case, each challenge with the goal of proving that you made the right choice in trusting him to get you through whatever obstacle you might be facing.

When he is not practicing law, you can find Alex hanging out with friends and family. He enjoys fishing, playing pool, and immersing himself in all Des Moines has to offer. Particularly, you can catch him at shows listening to local artists or wandering about the various markets and festivals Des Moines hosts. As if that is not enough, his dog, Chance, is always keeping him on his toes.

Have a question about our services?

We would love to hear from you.